CVRTPro is the worlds largest supplier of parts and engines for the Combat Vehicle Reconnaissance Tracked family of vehicles and is one of four websites built for the same client. 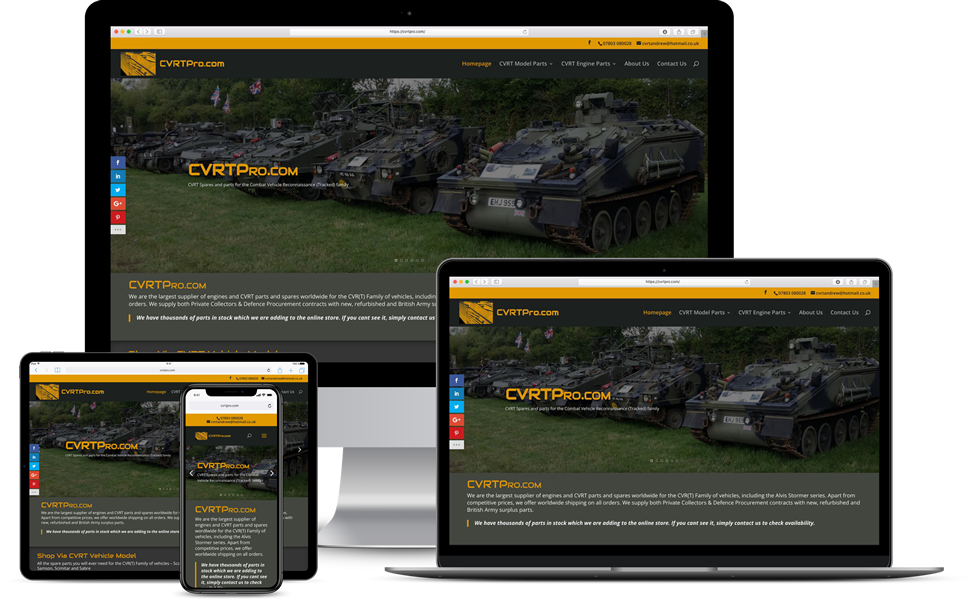 The CVR(T) was a group of vehicles initially developed for the British Army, but can now be find in other European countries, Africa, Asia and Middle East. As the number vehicles has been reduced by the army and some models retired, these vehicles have been released for private ownership and there are now hundreds privately owned.

CVRTPro was to be a new website with the requirement to list CVRT products, categorised by vehicle model, and listed by official part number, with the ability to add new products to the website inhouse.

We developed an ecommerce system that categorised parts by vehicle models. We initially populated the website with hundreds of parts whilst teaching the team how to add parts to it.

We highly recommend this company. They have delivered 4 websites for each division of our company, each ranking on page 1 of Google. They have also provided us with product branding such as brochures and business cards.

If you’d like to talk to us about your project, get some advice, or just ask a question, contact Sarah on 01932 698440 to discuss your requirements or sales@surreywebdesigns.com

This website uses cookies to improve your experience while you navigate through the website. Out of these, the cookies that are categorized as necessary are stored on your browser as they are essential for the working of basic functionalities of the website. We also use third-party cookies that help us analyze and understand how you use this website. These cookies will be stored in your browser only with your consent. You also have the option to opt-out of these cookies. But opting out of some of these cookies may affect your browsing experience.
Necessary Always Enabled
Necessary cookies are absolutely essential for the website to function properly. This category only includes cookies that ensures basic functionalities and security features of the website. These cookies do not store any personal information.
Non-necessary
Any cookies that may not be particularly necessary for the website to function and is used specifically to collect user personal data via analytics, ads, other embedded contents are termed as non-necessary cookies. It is mandatory to procure user consent prior to running these cookies on your website.
SAVE & ACCEPT